Monica Galetti is one of the best-known and highly renowned female chefs in London. Born in Samoa and raised in Wellington, New Zealand, Monica developed an early interest in food and trained as a chef in New Zealand.

In 1999 she upped-sticks and moved to London to work for Michel Roux Jr. at two Michelin-starred Le Gavroche. Monica’s talent was soon recognised, and she progressed rapidly, becoming the first female sous chef at Le Gavroche and then Michel’s head chef at Le Gavroche Tropiques in Mauritius, 2005.

Over the past ten years Monica has become a familiar television personality, as the inimitable presenter and judge on BBC2’s highly popular MasterChef: The Professionals. More recently she has also gone on to co-present two series of BBC2’s Amazing Hotels – Life Beyond the Lobby, alongside The Times restaurant critic, Giles Coren. 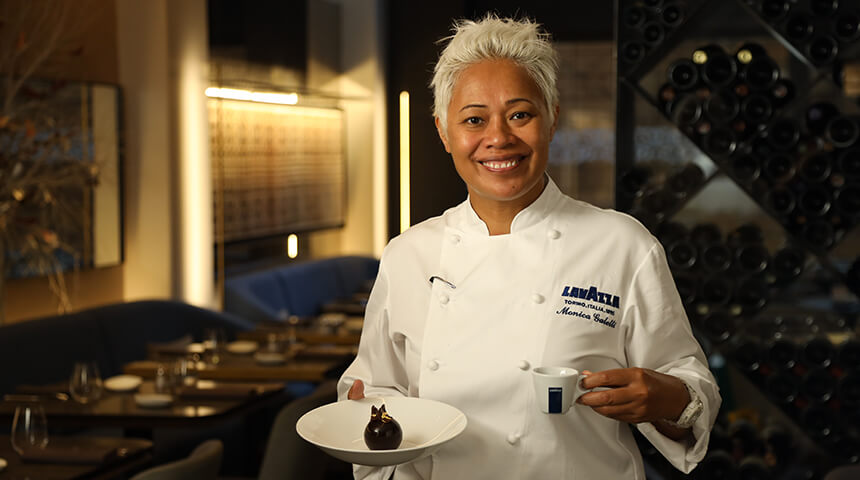 After a total of twelve years at Le Gavroche, Monica left in 2015 to spend some time with her husband and daughter and focus on finding the best site for her first restaurant in London, Mere which opened in 2017 in Fitzrovia. Mere, fittingly the name of Monica’s own mother, is a melting pot of cultural influences; mixing the classical French of her husband David’s childhood with the exotic South Pacific and New Zealand from her own upbringing, weaving in elements inspired by her travels and the British seasons.

Monica is the author of two books: Monica’s Kitchen and The Skills.